Eric
Munehiko
ALMA KAMINIITO (アルマカミニイト) is a Japanese pop duo under J.P ROOM. They eventually became the first SATOYAMA movement unit in 2012, under the hachama label.

The unit officially became inactive after December 2013, when it was announced that Eric would debut as a soloist.

On February 21, Eric and Munehiko where selected to participate in the 1st Forest Award NEW FACE Audition. Despite neither of them were placed, they both received a Special Award. Eventually, they ended up working together, forming ALMA KAMINIITO, being publicly official on August 11.[1]

On August 11, the ALMA KAMINIITO Official YouTube Channel was opened.

In November, ALMA KAMINIITO made their official debut. Their songs "Akane," "Ao ni Nosete," and "Blue Horizon" were featured in the film Sharehouse (starring Takahashi Ai). Though no movie soundtrack was released, all of these tracks were later released.

On April 25, they released their first major single, "Akane," in regular and limited editions, under the hachama label.

On October 24, they released their second major single, "Amatsubu Pearl / Dakishimetai Dakishimetai." It was originally scheduled for September 12, but was pushed back to late October.

On December 26, ALMA KAMINIITO released their first cover album, ALMA COVERS. Unlike most cover albums under the company, all of the tracks in ALMA COVERS were in English and Spanish.

On March 2, ALMA KAMINIITO participated in MUSIC FESTA Vol.0. They performed "Akane" and "Amatsubu Pearl," as well as including vocals in "Single Bed" and "Sora wo Minayo."

On March 3, ALMA KAMINIITO participated in the last day of Forest For Rest ~SATOYAMA e Ikou~ SATOYAMA movement in YOKOHAMA

On April 4, it was announced that Munehiko left the duo in order to take over his family business.[2][3] Until further activities have been determined, the unit will continue activities with Eric as the sole member.

On December 4, it was announced that Eric would debut as a soloist in spring 2014.[4]

During the Spring, ALMA KAMINIITO was removed from the SATOYAMA movement website, and the group's official website became inactive when Eric made his solo debut.

The origin of the group name "ALMA KAMINIITO" is inspired by Eric's native country of Peru. They combined of the spanish words for "Soul"/"Spirit" (alma) and "path"/"lane" (caminito) into a phonetic reading. 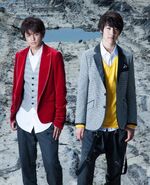