UP-FRONT GROUP Wiki
Register
Don't have an account?
Sign In
Advertisement
in: 1983 Births, October Births, Members from Gunma,
and 9 more

On February 21, Ono was selected to participate at the 1st Forest Award NEW FACE Audition along with 13 other acts. He and Eric were awarded with the Special Award. Later in 2011, both resulted being the members of the group ALMA KAMINIITO.

On April 4, Ono left ALMA KAMINIITO and J.P ROOM in order to take over his family business. 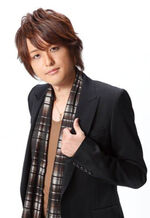