Sayaka
Kokoro
Yes Happy! is a Japanese pop duo formerly managed by UP-FRONT KANSAI. They were formed in 2008, but they became active in 2011 after they signed with UP-FRONT KANSAI. The group consists of Sayaka, the leader, and Kokoro, the sub-leader. Together, they performed most commonly in shopping centers and live halls in the Kansai area.

In 2008, Sayaka and Kokoro formed the duo Yes Happy!. Previously, both members had been acquaintances since they were young, as they had attended the same middle school and high school in Matsue, Shimane, Japan. They became friends during a baseball game in their third year of high school, after learning they were both fans of Hello! Project. After graduating high school, Sayaka moved to Osaka for university, and Kokoro began living with her in Osaka as she took auditions to become an idol. Yes Happy! was formed after Kokoro invited Sayaka to join a duo unit with her. During this time, they sporadically performed covers of idol songs and anime songs at shopping malls on occasion.

In June 2011, Yes Happy! joined UP-FRONT KANSAI. Sayaka had gotten in touch with UP-FRONT KANSAI at a job fair, and they both started working at the Hello! Project Official Shop in Shinsaibashi, Osaka. There, they also began operations in full swing as a duo unit from Shimane based in the Kansai area.

On August 13, their first original song "Yes Happy Day!!!" was performed in public.

On September 29, their second original song "Ne!" was performed in public.

On October 28, they launched the ~Yes Happy! CD Release e no Michi~ project. If Yes Happy! managed to successfully sell out 500 wristbands between November 2012 to February 2013, they would be able to release their first ever CD and hold a corresponding release event.

On January 14, the wristbands for the ~Yes Happy! CD Release e no Michi~ project were successfully sold out.

On March 22, Yes Happy! was inaugurated as the Matsue City Tourism Ambassador.

On July 11, Yes Happy! formed a three-member group with soloist Miyazaki Rio named Lovelys!!!! as a result of their joint lives together.[2] While in the group, Kokoro and Sayaka continued their Yes Happy! activities and were still often credited as Yes Happy! at lives and events. 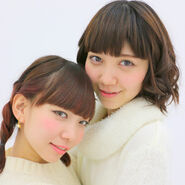